Deprecated: mysql_connect(): The mysql extension is deprecated and will be removed in the future: use mysqli or PDO instead in /storage/content/14/2014914/headspinrecordings.com/public_html/Connections/Headspin.php on line 9 Headspin Recordings - Releases -My get up and go just got up and went by Ass (HEAD 007)

My get up and go just got up and went Ass 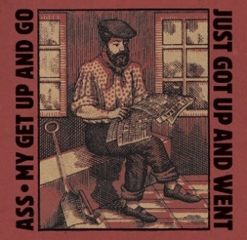 ‘My Get Up and Go Just Got Up and Went’ is that rare kind of record; bewitching and thougth-provoking, comforting and challenging. It’s a real treat, and a chance to hear the whispered charm of a subtly disarming performer. To paraphrase George Clinton - free your mind, and Ass will follow…

Peering out between the mass of strings, hanging like vines, there must have been a spark of childish curiosity. From the giddy playfulness of youth all the way to the folk hinterland, Andreas Soderstrom has been surrounded by instruments, exposed to the sounds of his father’s bazouki factory – an extraordinary melange of clattering noise and metallic melody.

That natural inquisitiveness has obviously paid off, and it surely can’t be a coincidence that a career in music beckoned. Trading under the pseudonym Ass – it stands for Andreas Soderstrom Solo – for more than a decade he has been the hitherto unknown man of Swedish pop, having played with the likes of electro-pop priestess Jenny Wilson, digital folk stalwarts Tape, offbeat folk-pop minstrel Blood Music, and Taken By Trees, the latest incarnation of former Concretes singer Victoria Bergsman.

All that will change with the release of ‘My Get Up and Go Just Got Up and Went’, the second full-length album from Soderstrom under his Ass moniker. Soderstrom plays all of the instruments found on this quietly intoxicating 10-track record, the follow-up to his astonishingly assured, eponymous debut – both released on Headspin Recordings. It finds him hacking through the folk undergrowth, his fluid dynamic underpinning a stark melancholy which simmers throughout.

From the Britfolk finger-picking of ‘I’ve Been Here’ to the austere ‘Cool Water’, the self-taught multi-instrumentalist wrings a plaintive beauty from his fingers; penning profoundly moving, largely non-vocal entities, augmented at various points by electronic gurgles, horns and a harmonium. ‘Wheels and Wings’, with its chiming guitar melody and horn counterpoint, is a rare vocal outing, Soderstrom’s subtle intonation adding a sweetness and warmth to proceedings.

Harking back to his debut, the elegantly swooning ‘It Only Takes Minutes’ revisits the cyclical moments found on his previous outing, but there’s an atmospheric airiness infusing this record which leavens these near-macabre hymns. Minimal and majestic, the repeated melody patterns twist in every direction, wrapping and turning in on themselves like a maypole, before loping to a folk-stained climax.

Daubing layer on top of layer on an intricately detailed canvas, Soderstrom’s sleight of hand in combining these varied textures is never more evident than on ‘Escape From NY’, which buzzes and throbs in unison with his rhythmic playing – there’s a sense of delicacy and wonder cloaked by a dark foretelling; a hushed but audible eeriness digging away at your subconscious, heightening that unease. The low-key majesty of Soderstrom’s gentle songs, like on closing track Vertical Spar, is here in abundance.

Channelling a hypnotic style which is at times reminiscent of folk legends such as Bert Jansch, John Renbourn and John Fahey, his crisp compositions nevertheless have an ultra-modernist edge to them, digital elements seeping through and sounding perfectly at home, but with a softly engaging feel rather than the clinical hum of technology.

‘My Get Up and Go Just Got Up and Went’ is that rare kind of record; bewitching and thougth-provoking, comforting and challenging. It’s a real treat, and a chance to hear the whispered charm of a subtly disarming performer. To paraphrase George Clinton - free your mind, and Ass will follow…