Deprecated: mysql_connect(): The mysql extension is deprecated and will be removed in the future: use mysqli or PDO instead in /storage/content/14/2014914/headspinrecordings.com/public_html/Connections/Headspin.php on line 9 Headspin Recordings - Releases -Salt Marsh by Ass (HEAD 009) 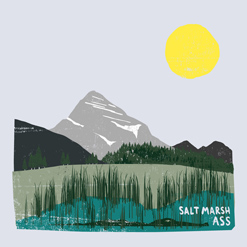 Salt Marsh isn’t so much a revolution as an evolution, adding new layers to his beguilingly intricate hymns and fleshing them out in such a way that creates new atmospheres and horizons. It’s a bold statement – a leap of faith, even – and it’s one which is already paying great dividends.

With his third full-length album, Salt Marsh, released on Headspin Recordings, Andreas Soderstrom (aka Ass) seemingly adheres to this principle in creating an album which is so much more than the sum of its parts. Isolate any of its constituent tracks and you’ll be left with a handful of beautiful, folk-inspired songs but that’s only part of the story. An ambitious step forward after his excellent previous outings – the eponymous debut and its stark follow-up, My Get Up and Go Just Got Up and Went – Soderstrom delivers an album which builds on that earlier momentum but contorts it into new and interesting shapes, and which begs to be devoured whole.

Unusually for an entirely wordless record, Salt Marsh appears to thematically link its seven songs, with musical motifs contributing to the overall mood and uniting the various strands Soderstrom introduces, not least the hushed, restrained squalls which bookend the album. Where previous Ass records largely consisted of tightly-woven melody and melancholy of his own making, this time around there’s a whole supporting cast of musicians on hand, with the intoxicating result being an impressive array of instruments and a fuller sound, while producer Johan Berthling – founder of the label Hapna and the band Tape – gives these wonderfully dense compositions room to breathe, including the myriad noises which add to their delicious complexity.

Songs such as the winding ‘Astrid, Where Have You Been So Long?’ gradually build from gently finger-picked foundations to incorporate a host of other ingredients, including mournful horns, plangent bass and twinkling flourishes, before jazz-infused percussion takes the song in an entirely different direction. While the seeds of these arrangements lie in macabre folk, there’s an otherworldliness about Soderstrom’s work which transcends the notion of the troubadour and moves into other territory, fusing acoustic textures with the psychedelic and progressive.

Being no stranger to the sounds of Brit-folk, Soderstrom – who has previously performed with the likes of El Perro Del Mar, Tape, Blood Music and Taken By Trees – excels with ‘Hit Considered’, which makes further use of jazz rhythms in a way which is deeply evocative of Pentangle, where the guitar-based melody circles like a predatory bird waiting to swoop, while the rolling rhythm patterns ensure that the song fizzes with a resplendent energy, recalling John Fahey, Six Organs of Admittance and Voice of the Seven Woods. It’s a mood capitalised on by the thrillingly insistent, flute-propelled title track, while album closer ‘Finders Capers’ treads similar ground with the aid of delicate strings which wheeze and throb.

There’s always been an eerily rhythmic feel to Soderstrom’s playing style, but much of Salt Marsh brings this to the fore with urgency. ‘One Piece Concept’ is perhaps closer in spirit to previous Ass releases due to its plaintive melody, but adds further instrumentation such as xylophone and bells to create a strange slice of languid folk-pop, all about building and sustaining a mood. When the chiming guitar melody enters during its final third, the song begins to resemble a higher-fidelity facsimile of the kind of meticulously layered, hypnotic left-field pop which has been the calling card of blogosphere darlings such as Julian Lynch and Matt Mondanile’s Ducktails.

Salt Marsh isn’t so much a revolution as an evolution, adding new layers to his beguilingly intricate hymns and fleshing them out in such a way that creates new atmospheres and horizons. It’s a bold statement – a leap of faith, even – and it’s one which is already paying great dividends.