Deprecated: mysql_connect(): The mysql extension is deprecated and will be removed in the future: use mysqli or PDO instead in /storage/content/14/2014914/headspinrecordings.com/public_html/Connections/Headspin.php on line 9 Headspin Recordings - Releases -Drömt by Matti Bye (HEAD 010 ) 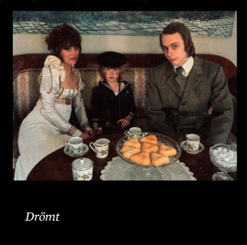 'Drömt', swedish for 'dreamt', is music lingering in the borderlands between dream, childhood, and departure.

The red painted cheeks of the composer as a seven year old child on the cover of the album is a key to a world that seems oddly disconcerting seen peering through stained glass at a world of make-believe, a dressed up, theatrical, artificial past.

This music was was conceived during a dark patch, a time of change, of leave-taking, and born at the moment when silence and inwardness give way to expression, flashes of light, and shouts at times rough, heroic and exultant, for example in the track 'Uppbrott'(’Departure’), at others romantic, misty, and unreal, like in ’Sömngångare’ (’Sleepwalkers’)