Deprecated: mysql_connect(): The mysql extension is deprecated and will be removed in the future: use mysqli or PDO instead in /storage/content/14/2014914/headspinrecordings.com/public_html/Connections/Headspin.php on line 9 Headspin Recordings - Releases -Oh Lord, Why can't I keep my big mouth shut by Yttling Jazz (HEAD 004) 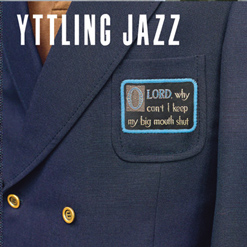 “Oh Lord, Why can’t I keep my mouth shut” is simultaneously the most respectful and the most disrespectful jazz-album that has come about in Sweden during the current century. With open referrals and even commentaries to his sources of inspiration and darlings; Charlie Mingus, Duke Ellington, Ornette Coleman, Don Ellis, Nino Rota, Lars Gullin, Ennio Morricone, Joe Meek, Jan Johansson and others, Björn Yttling and his men have blasted the prevalent framework of what jazz should sound like, and that regardless of what side you claim to belong to. Shameless and harsh with a color-richness you rarely hear, this 9-step rocket finds its way into each cell of your center of perception !

Björn Yttling is, of course, best known as one third of the pop-constellation Peter, Bjorn and John, but also as the producer of artists like Nicolai Dunger, Marit Bergman, Robyn and Moneybrother. For all that, Björn has snorted at jazz before. In the early 1990’s he had a quintet that among other venues played at the Fasching Jazz Club in Stockholm. Ten years later, spurred by Jonas Kullhammar, he went back into writing “jazz tunes” again. The outcome became this pearl, where Björn’s unerring feeling for sound, composition and arrangement - not essentially different from Sun Ra’s exclusive universe - takes Jazz up to new domains and dimensions. Yttling Jazz = cascades of rhythm and sound!

Björn’s own commentaries track by track.