Deprecated: mysql_connect(): The mysql extension is deprecated and will be removed in the future: use mysqli or PDO instead in /storage/content/14/2014914/headspinrecordings.com/public_html/Connections/Headspin.php on line 9 Headspin Recordings - Releases -The Reason Why Vol. 2 by Goran Kajfeš (HEAD 021)

The Reason Why Vol. 2 Goran Kajfeš 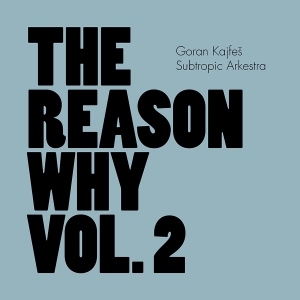 Swedish trumpeter Goran Kajfes and his eclectic Subtropic Arkestra continue their whistle-stop tour of the world with this recording of a diverse collection of songs, whose authors this time include American indie band Grizzly Bear, Cameroonian author and musician Francis Bebey, and Brazilian legend Milton Nascimento, among others. In addition, there a healthy dose of Turkish psychedelic and Balkan-inspired sounds and rhythms, which draw on Goran Kajfes' family roots in the former Yugoslavia.

The sound and character of Goran Kajfes’ Subtropic Arkestra has been defined during its many live shows at venues and festivals worldwide and is reinforced on The Reason Why Vol. 2 by guitarist Reine Fiske (Dungen) and singer-songwriter José González. The group’s frenetic energy has been captured this time by celebrated Swedish mix engineer Mattias Glavå.

“The Reason Why Vol. 2 proffers further takes on an eclectic array of music…the instrumental band consistently serves up scintillating arrangements that present the work in dynamic, new light. It helps that Kajfes is surrounded by some of Sweden's best players, but the vision is all his. On the group's new record I keep hearing the Subtropic Arkestra as the Menahan Street Band transported to Communist-era Eastern Europe—that's a big compliment in my book.” Peter Margasak, Chicago Reader (USA)