Deprecated: mysql_connect(): The mysql extension is deprecated and will be removed in the future: use mysqli or PDO instead in /storage/content/14/2014914/headspinrecordings.com/public_html/Connections/Headspin.php on line 9 Headspin Recordings - Releases -Headspin by Goran Kajfeš (HEAD 001) 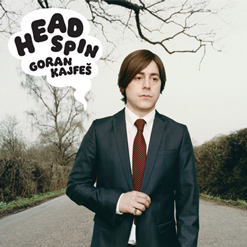 Headspin is a "Tutu" for the 21st century.

Goran Kajfes debut album Home (on the EMI imprint), was Grammy nominated in Sweden and met with much critical acclaim abroad. Since then Goran has been busy playing with groups like Oddjob, Nacka Forum and the Flesh Quartet. Always a sought after session player, Goran could be heard on numerous albums including recent releases by Stina Nordenstam and Nicolai Dunger.

The follow-up entitled Headspin is an exciting and unexpected mix of electronica, afrobeat, Miles-coloured mystique, dub and Balkan-swing. Among the musicians some of Sweden’s top players; Per "Texas" Johansson, Johan Berthling, Jesper Nordenström and rappers ADL and Timbuktu. The album is produced by David Österberg (LPC, Stina Nordenstam).

Headspin got rave reviews in Scandinavia, got chosen as one of the years most important jazz albums in France, got picked up by Sony Jazz in Tokyo and won the Swedish grammy award for best jazz album 2004.